Bloons Pop! MOD APK is a great game that will give players a familiar idea of ​​the battle of monkeys and colorful Bloons. Bloons visited the monkey town and turned everything upside down. At this point, you will need to fight with the monkeys to knock them all out and put everything back in place. The game has interesting puzzle elements with new gameplay, promising to bring a lot of fun to players. 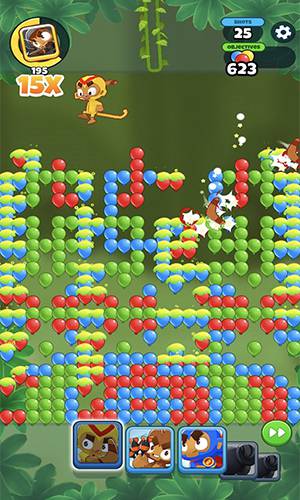 The developer Ninja Kiwi is not strange to players with the Bloons TD series of games. Now, they continue to bring players their latest idea of ​​the fight between the monkey vs Bloons. You will use a monkey army with various special abilities to carry out attacks. The game is a series of levels with increasing difficulty. Now, join the team to destroy all Bloons, score points, and get the rewards.

In Bloons Pop!, players will aim to break the required number of balloons to win. In each level, players will use monkey warriors to attack Bloons in different ways and you will have a certain number of attacks. If you run out of turns but haven’t destroyed enough balls, you’ve failed the mission. You will continue to lose one turn. Gamers only have a maximum of 5 turns to play. If you use it up, you need to wait for it to recover or buy more. To improve the attacking power, players need to grasp the ability of monkey warriors. Then you will use them in different cases. Also, players can use additional Powerups for power.

At first, you will find that destroying Bloons is extremely simple. They lie close together and there is almost nothing that can stop you from destroying them. However, the higher levels will bring much greater challenges. The level will appear more obstacles, movable Bloons and more challenges. At this point, gamers have to calculate more carefully to be able to shoot accurately at the targets. Maybe you have to play a level couple of times. 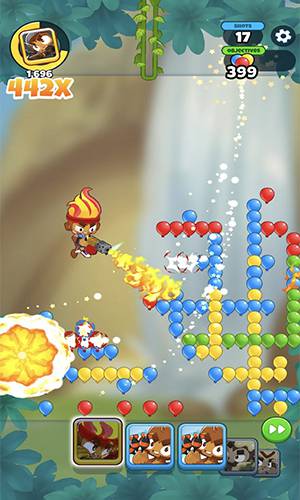 Powerups make it easier for you to win

In the game, Powerups is an interesting element that you should take full advantage of to win the game screen. There are about 10 different types of Powerups that you can unlock to use them. Each of them will have great power to help you destroy a large number of Bloons. However, activating these Powerups is not easy. They can appear between Bloons or behind obstacles that take a lot of effort to activate.

In Bloons Pop!, there are many special monkey warriors inspired by the previous familiar games of kiwi ninja. Each of them will have a unique ability for you to control and destroy Bloons. You will need to understand their power to get full attack efficiency. For example, a monkey capable of archery will be used to attack when there are many Bloons densely packed. Or a dart-throwing monkey will help you penetrate a certain position to be able to activate Powerups. In addition, you can also merge monkeys to create a MEGA monkey which is capable of wiping out many Bloons on the map.

Bloons Pop! has had certain improvements in terms of graphics compared to its previous versions. In which the image is much smoother and sharper. Also, the game adds many buildings and locations for players to exploit for more fun. The monkeys are also more active with diverse attacking movements, rather than simply standing still and throwing. Moreover, Bloons Pop’s music remains vibrant and liberal, making players more excited. 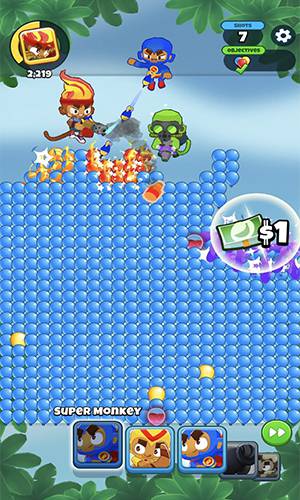 Bloons Pop! is a refreshing game, which will make the fans of the developer ninja kiwi have a very unique experience in approaching the puzzle gameplay. You will be playing with many familiar monkeys but with improved modern images. Finally, if you want to download Bloons Pop! MOD for free, please see the link at the end of this article. Thanks and have fun!