Don’t Starve: Pocket Edition is an engaging adventure game from the developer Klei Entertainment Inc. It has quite attractive survival content, which has made many players excited. In the game, you will live with scientist Wilson in a gloomy and bleak world. Also, the game provides you with many challenges, difficulties and new things in the depth of the story. Please join us to explore the game’s highlights right now! 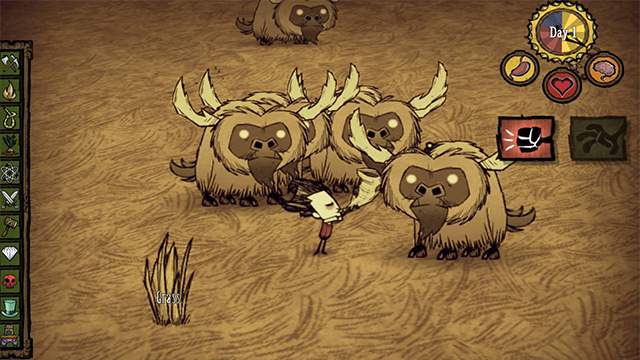 In Don’t Starve: Pocket Edition, Wilson is a scientist with many different experiments, but it seems that his experiments are not working at all. One day, he was startled when the radio talked to him. It revealed to him that it recognized his trouble and secret knowledge. Wilson immediately agreed, and a series of fabrication blueprints came to mind. Then, he created a giant machine and was praised by the radio. Next, the radio told him to pull the switch on the machine, but he hesitated. Finally, at the persuasion of the radio, he pulled the switch, causing the machine to operate and vibrate violently. A spooky arm immediately brought Wilson to another world with Maxwell’s appearance. From there, Wilson’s adventure began.

Don’t Starve: Pocket Edition is an adventure game with a random and expanding world. In which players can control one of the characters to survive each day and try to escape from the overcast land. Besides, the game will be the character’s continuous development over the days with items, experience points, and more. Also, Don’t Starve relies on a day and night cycle to cause volatility to the game. During the day, players will spend most of their time exploring the world, searching for food, collecting items and resources. At night, gamers need to find a shelter, look for a light source to stop the monster’s attack.

In the game, you can craft a lot of different things from the ingredients you have collected. You can create buildings, weapons or prepare your food. Moreover, some characters have perks and limitations on their ability to eat and drink. However, the food spoils easily so don’t keep them for too long. If your character eats spoiled food, it will cause health and intelligence to decline, as well as the hunger will increase rapidly.

Besides, each day will last 8 minutes of real-time. During that time, the player will continually make physical changes that reduce life. In-game death can come in many different ways. The player has three gauges above his head that include hunger, health, and Mindfulness. Specifically, Hunger is the worst, which you can deal with by using food. Health will decrease at the time of marriage and will recover at night. Finally, players can maintain mindfulness by mentally stimulating activities, such as sleeping, picking flowers… 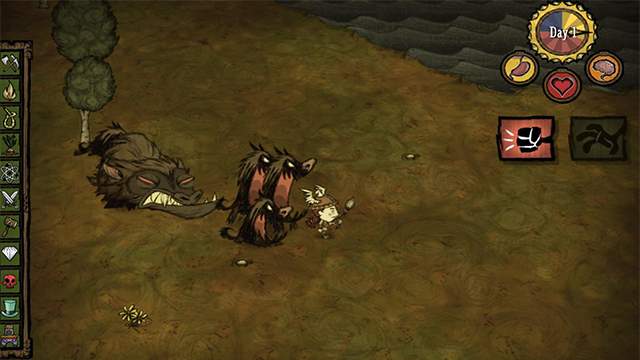 Wilson is a talented scientist, which is the main character in the game Don’t Starve: Pocket Edition. He doesn’t have a lot of talent for survival. Wilson’s beard can slow the rate of freezing in winter and increase heat in summer. Besides, he has the most basic stats and has almost no drawbacks.

In addition to Wilson, the game also offers additional characters including:

In Don’t Starve: Pocket Edition, the villain is named Maxwell, who is a puppet master with a skinny and frail appearance. He is a demon transformation and his anger at the characters in the game increases in the ensuing chapters of the story.

Don’t Starve: Pocket Edition is a simple 2D site-built game. Its visual style resembles hand-drawn pictures with a natural setting. In which, there is a variety of animals and trees. Besides, the images are also in simple and repetitive ways. Especially, the game’s design will go against most modern games. However, its huge attraction is undeniable. Also, the sound is an interesting point that players will enjoy the natural sounds of birds, wind, waves… However, the game will not have background music but only focus on activities. 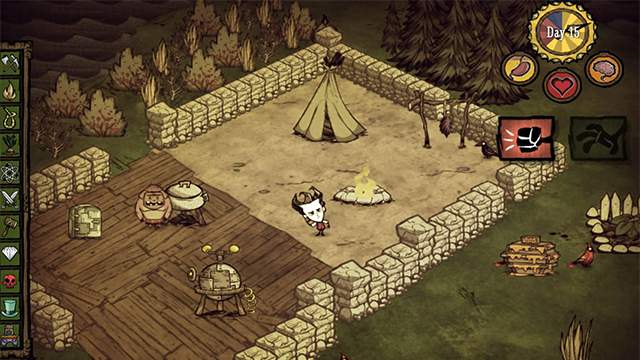 Overall, Don’t Starve: Pocket Edition is a fascinating adventure game with unique features. Players can choose this game to entertain in their spare time. If you are looking for a way to download this game for free, please go to the end of this article and get the link to download the game’s MOD APK files. Please rate and share this game if you find it interesting! Thanks and have fun!