Zombie Idle Defense is an exciting idle-entertainment game on Android phones. This game uses the familiar idea of ​​the war between the human and the zombies. However, this idea has been refreshed and amused by many players. Please join us in this article to discover more interesting things and how to download Zombie Idle Defense MOD APK for Android phones!

Zombie Idle Defense is a game from the developer ONESOFT. This is an experienced developer in building a variety of entertaining mobile games. Besides, this game is an interesting idea emerging as Idle-style games, which have received a lot of attention from the community. Since the release, Zombie Idle Defense has quickly received over 5 million downloads and hundreds of thousands of positive reviews from players. It promises to be an attractive game worth experiencing. 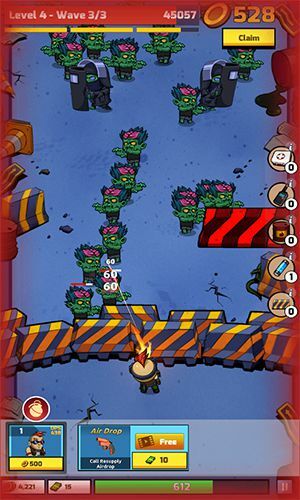 Zombie Idle Defense is a simple game that is easy for you to get used to. In which, players will recruit heroes who are the survivors after the pandemic. You have to take them behind defensive walls to attack bloodthirsty zombies. Besides, players have to fight many waves of monsters. At this point, your character will automatically attack with the guns. Players will have the right to decide to participate in the matches or stand by. By clicking on the screen, gamers can attack the Zombie with white bullets. Also, players can use more items to support attacks, such as grenades, bombs, fire…

After fierce battles, players will receive money or precious chests. Then, you can use them to buy more weapons, upgrade characters, and do many other things to increase the power. Also, the game has other interesting game styles that players can choose from, such as fighting continuously to overcome monsters or hunting powerful monster bosses.

In this game, the character is probably one of the most important factors for your victory. The more characters you have, the greater the fighting power will be. However, you can only bring up to 4 characters of a total of 9 characters. Besides, you can also level up your character to increase stats, such as health, armor, damage… You can also unlock the skills of that character after gaining the required number of stars.

The weapon system is what makes many people feel excited. Specifically, players can collect a lot of guns that even hardly appear in the store. They are ranked by stars. The higher the weapon’s rank is and the more stars, the better the stats will be that help you destroy the Zombie faster. Also, gamers can use Scraps that you collected during the game to upgrade weapons. If you have too many weapons of the same type, you can fuse them to increase their power. 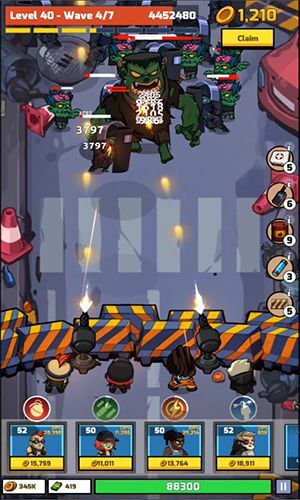 Playing the game for free without the internet

Zombie Idle Defense is a free game. You can download it easily from the Google Play store. Besides, we also share with you its Mod version named Zombie Idle Defense MOD for free on Android. You just need to click on the link at the bottom of this article to be able to download it. Also, you can completely play this game without an internet connection, which is suitable for you to play at any time.

Zombie Idle Defense is built with simple 2D graphics but with extremely high quality and sharp images. With that simple design, the game works smoothly on the mobile. Also, this design is suitable for an Idle game. You can also experience unique music from battles.

Zombie Idle Defense is a great idle-entertaining game. It offers many advanced features for players. You can choose this game for entertainment anywhere without worrying about interruptions. In this article, we will regularly update the latest versions of the game and many other products. Please visit our blog regularly for more!